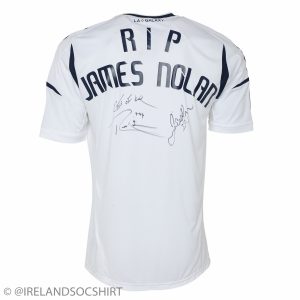 With the blessing of the Nolan family, this Irish soccer museum is dedicated to the memory of James Nolan from Blessington, County Wicklow. James tragically lost his life in Poland in 2012 whilst supporting the Irish team during Euro 2012.

James was just 21 years of age and was following in the footsteps of many Irish fans who represent their country, with distinction all over the world.

I did not know James personally, but his sudden tragic death touched the hearts of every Irish football fan and my own family especially. With this project I hope that his name will live on and continue to be connected with the team that he loved to support.

The best fans in the world are now a man down. James Nolan will forever be one of the "Boys in Green".